You'll Be Tempted to Use a Fork

If you tell a lie often enough it becomes the truth. That's not a lie; that is the truth.

And the irony of that is killing us all.
-bill kenny
Posted by William Kenny at 12:00 AM No comments:

Labels: but use a spoon so you get every drop.

I Always Looked Good in Blue

Thirty-eight years ago this morning, at twenty minutes after nine (or thereabouts), I stopped being in the United States Air Force. It was, more or less, a mutual decision; we both decided to see other people. I offered to turn in the clothes, both the olive-drab (pre-battle dress uniform (BDU) days) utility uniforms and the off-we-go-into-the-wild-blue-yonder blue ones and was thrilled beyond words when they opted to keep their haircuts.

I never really got the hang of the haircuts. When I asked the recruiter in East Brunswick, New Jersey, a wise old Master Sergeant about the haircut we'd get in Air Force basic military training (BMTS) at Lackland Air Force Base, Texas (the largest airbase in the world without a landing strip, I kid you not), he paused and looking very steadily at me offered, 'your hair will be much closer to your head than far away.' Believe it or not, he was right on the money with that.In the years I served, I learned there were two types of haircuts men got in the military. One was the haircut they got when they needed one and the other was the kind they got when they were told they needed one. You strove to avoid the latter and in my eight years of active (if not enthusiastic) service, I prided myself on never needing to be told to get a haircut.I was never a big fan of headgear either, I should add. It was the era before everything and everyone had ball caps (except baseball players) and no one I know, in any service, ever enjoyed the bus driver hat (the formal one we've seen in all the photos) or the flight cap for which we had a rather coarse nickname I shan't repeat here but I certainly used enough in my time. It always seemed to me that in the interest of "uniform" appearance, if we all wore the same cover, who cared about the haircuts.For reasons I never fully understood, I failed to press that argument successfully to those in charge of my every waking and sleeping moment. I always suspected the Air Force was a leisure-time activity of the barbers' union or some other hirsute control conspiracy because no matter the discussion (we never argued in the Air Force; actually, those of us who were jeeps never argued upwards) and no matter how correct your position or research, the famous last words always seemed to be "and you need a haircut." And I certainly never got to say them.So in honor of a moment of my personal past I've passed out of, I'll walk past a barbershop and not hop up into the chair and ask for the special. I decided long ago that eight (years) was enough. It was a close shave, but I've never regretted not living on the knife's edge.-bill kenny
Posted by William Kenny at 12:00 AM No comments:

Labels: Not enough to make it a life choice

Today marks the beginning of Autumn. It says so right here on my desk calendar in Norwich, Connecticut, USA, printed someplace far away where, I suspect, many of those working in that desk calendar-making factory dream of one day visiting us.

As part of my continuing commitment to the BGO (Blinding Glimpse of the Obvious) Project, let me add, in case it had escaped your notice, we had our last sunset after seven o'clock last Wednesday evening (won't happen again until March of next year) so Autumn's arrival isn't really that big a surprise, is it?

As the days grow shorter and the leaves pile higher on fallow grass, lawn signs for a plethora of candidates for political office spring up practically overnight.  I smiled walking around in recent days at the number of signs and their size and in which neighborhoods I came across the most. If there is a seasonal growth business, aside from beach cabanas at the shore, it's most assuredly campaign signs.While we have the good fortune to have volunteers willing to seek office for City Council and Board of Education, it's easy to forget the costs they pay in terms of time and money to become candidates.And there's more to costs than meets the eye. There are the things you cannot buy because you're paying for campaign materials and there's the time away from family and friends because you're knocking on neighborhood doors and visiting with registered voters hoping to get them to at least hear you out. Conversations require two persons and when one is missing, it's a monologue.I don't mean to offer that last point flippantly but there's a lot of things we don't too well for the most part and while this isn't a complete list, it's a pretty good start:push the chair back in under the table when we get up;put the seat down on the toilet;come to a full stop at the red light before making a right turn;not talking on a cellphone while driving;and not voting in municipal elections.  We complain about a lack of freedom of choice but I think we actually prefer having freedom from choice. By insisting that 'there's nothing I can do' or that 'no one cares what I think' we absolve ourselves of all responsibility and blame when things fail.And as we all know, things fail frequently. It's all part of life and why life is a contact sport. You can continue to claim you're a victim or you can listen when a candidate for office stops by and tell them what you'd like them to do for all of us. What are they gonna do? Tell you to shut up? They started it!We can continue to tell each other that 'it doesn't make any difference' and 'one vote doesn't count,' and guess what? Eventually, we're right. We become our very own self-fulfilling prophecy-aside from maybe winning a tee-shirt, I don't see what the benefit is to that kind of behavior.Did you ever hear about that city in Connecticut whose residents became more passive in each successive election until they barely reached double digits in voter turnout? You haven't? Neither has anyone else.

Some days it's hard to put into words how you feel and then, just when you least expected it, you stumble across someone/something in a completely different context who has captured you to a tee and never intended to nor realized they had. 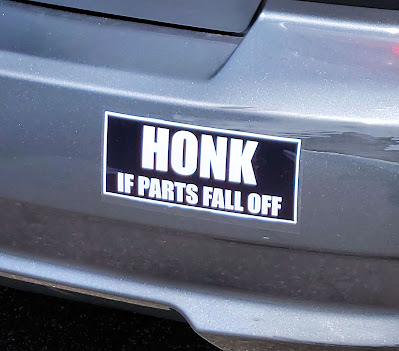 Labels: The 'check engine' light has burnt out

If you think life's not fair, wait until you get to the afterlife.

Hey, I don't wanna hear it! Buy a ticket, get the whole ride.
-bill kenny

Labels: Boy George is a BOGO

In This World of Sin and Woe

Winston Churchill is both famous and infamous for many things, both said and done. I've always enjoyed a quote attributed to him, repeated here in its full context in case someone decides to pay me for by-the-word offerings.

We here in The Land of the Round DoorKnobs have a short-hand form of democracy for the most part.

At almost all levels of government we have a two-party system; not so much because all of the really great and good ideas come from one or the other but because nuance is lost on most of us and the lesser of two weasels seem to be about the best intellectually we can do on Election Day.

I can reduce it even further with the help of a cartoon:

Sometimes, in thinking about Churchill, I suspect we don't spend enough time considering the effect his drinking had on his thinking.
-bill kenny

Labels: which I always assumed was an exit in Rhode Island

This is the last summer weekend of 2021, which may come as a shock, I suspect, to millions of the nation's schoolchildren who've been back to the academic grindstone either in-person or via virtual learning for weeks now and are already looking forward to the Thanksgiving break.

Back when I was a wee slip of a lad, summers seemed to go on forever. We used to spring out of bed in order to get a head start on doing absolutely nothing until late in the afternoon when, with a little luck, a marathon baseball game would break out on the dirt field up the street from the Girard's house. No one kept score and nobody cared who won or lost. Players would come and go for hours, heading home for dinner or to go shopping with Mom and then return hours later sometimes having to be on the other team.Usually what we did, depending on how good the player returning really was, he would have to wait to rejoin the game until another player showed up to balance him out. Mid-inning trades were also not unknown. The games went on until the daylight was dying or, more correctly, had died, and then Mr. Girard would back his car out of the carport and turn the headlights on to wash over the field so we could wrap it finally (until tomorrow when it began again).We did this for years until someone bought the lot and built a house on it. We all hated the people who moved in and lived there. And, much later, long after many of us have moved away to other neighborhoods when the house burned down, I felt a twinge of guilt even though I had nothing to do with what happened-the power of wishing and its consequences, I guess.As I got older the summers got shorter and when our Pat and Mike were smaller it was fun to watch the cycle begin again with them. We're closing in on 'leaf peeping' that everyone associates with New England weekends in the fall. But for me, it's already too late. I hate autumn-I can smell the scent of all things dying even before they actually do and I'm left with memories of the summer to get me through the winter into the following spring. Enjoy what you have, while you have it.-bill kenny
Posted by William Kenny at 12:00 AM No comments:

Labels: Back in the scrum of a wet afternoon
Older Posts Home
Subscribe to: Posts (Atom)

Points of Interest on the Human Highway